You’ve probably seen the Esher Road between the Barley Mow and the Garsons Roundabout has recently gone from a two lane dual carriageway down to a single lane with a buffer zone between the carriageway and the cycle lane.

Now my first reaction was that this was bonkers, how can two lanes go into one without causing absolute traffic chaos.

And as someone who lives not too far from the Barley Mow roundabout I would be impacted more than most if this were to turn into a disaster but I’m yet to be convinced that it will turn into a disaster so I’m happy to see how it develops and maybe, just maybe, we will have a safer, and lower speed carriageway.

Our elected representatives have been fairly transparent and have assured local residents that if it negatively impacts the traffic around the local area it will be reversed.

But some have become quite angrily opposed to this, extremely disproportionately in my view, I don’t believe you should be leveling personal attacks and personal abuse against anyone who doesn’t blindly chant the mantra of the angry mob.

So why are they so opposed?

What are their concerns and objections?

We reached out to the group who are coordinating the opposition and offered them a completely blank canvas for them to share and express what concerns and objections are behind their angry opposition so that we could accurately represent their views in this piece.

Sadly they collectively decided that they didn’t want to tell us so we still don’t know.

Thankfully we are grateful to our Hersham public representatives who were more than happy to discuss the Active Travel Scheme with us this scheme in more detail and share their views with the wider community.

John O’Reilly, Peter Szanto and Mary Sheldon sent us an explanation around the rationale for the scheme and what happens next from the Conservative Group.

Hersham Village Society Councillor Roy Green shared with us his views of opposition.

“The fundamental reason why we have conditionally supported this initiative goes back to March 2019 when, following a tragic fatality in 2017, a 2892 signature petition was submitted to the Elmbridge Local Committee seeking a feasibility study to consider options for improving pedestrian safety on the A244 Hersham Bypass.

This is all about enhancing safety along a dangerous road where the speed limit is routinely and excessively breached.

Evaluation work on a feasibility study was well underway. Several alternative options were being examined including:

Surrey Highways engineers were going to recommend the scheme we are now piloting, but it would have taken at least another year to implement.

When the Active Travel scheme was introduced by Government during the current C-19 crisis Surrey Highways realised that the scheme they were going to recommend could be introduced much more quickly and at no cost to Surrey taxpayers.

They therefore immediately looked at applying for this funding for the scheme. Active Travel requires Highway Authorities to take space away from motorists and reallocate it to pedestrians and cyclists.

The timescales imposed by the Government for the Active Travel programme have meant we were unable to undertake the usual kind of consultation, though this would take place once the pilot has been completed, if it were to be made permanent.

The scheme being implemented along this one kilometre stretch of dual carriageway reduces the road to single lane each way, provides improved cycle lanes, reduces the number of cars breaking the 40mph speed limit, and above all, introduces three uncontrolled pedestrian crossings near each of the three bus stops.

The £70k cost is entirely funded by the Government not Surrey taxpayers. So far about £20,00 has been spent on the project.

Highways engineers assured us that the capacity of the road is determined by access to the roundabouts and the link roads, not by the number of lanes on most of the road, and that this scheme would not adversely impact road congestion.

This scheme reverts to two lanes well before the roundabouts at each end to maintain traffic flow capacity as before (though their length may change based on actual flows). However, many people voiced fears that, on the contrary, the scheme would cause traffic chaos and congestion. We too would find that totally unacceptable and should it happen, the scheme would be abandoned.

These concerns were understandably exacerbated by the congestion caused during the implementation of the changes in early/mid-August, since more of the lanes needed to be coned off to protect workers in the road.

We therefore decided that an additional trial was needed to test traffic flows as the road became busier and so, at our insistence, work was paused on the scheme from August 22nd. This additional trial will last until November.

Three Councillors have been monitoring the impact on at least a twice daily basis and during busy periods.

The results have been positive so far, but on two mornings, there have been delays (not caused by the scheme itself but because of congestion in Esher) from around 8.15am to 8.40am towards the Princess Alice Roundabout.

These will be addressed by extending the two-lane approach and possibly also amending the timing of traffic lights in Esher.

Should the present traffic impact test be successful, the three pedestrian crossings will be completed, and the full scheme will then be trialled as designed. We will consult with residents before any decision is taken as to make it permanent.”

And the view against from Cllr Roy Green:

“We have been trying for years to get safety measures in on this extremely busy road, over the sixty years since it was built there has been 12 deaths, the majority caused by speeding traffic. The councils, both Elmbridge and Surrey have tried over the years to make safety improvements.

I was responsible for getting the Pelican crossing outside the Garage but had to fight hard for it and with the help of the other councillors. In those days Highways come under Elmbridge and was more local.

After the last death three years ago. And a petition being sent to the county council, the local committee authorised the officers to conduct a survey of how the safety of pedestrians on the road could be improved.

It was clear to a majority of residents who voiced their opinions that what was wanted was another pelican crossing by
the Leas (Flats) and speed cameras.

The officers have said that the costs would be too much! (I believe around £200k)

Recently the Government have given councils money to make roads safer for cyclists and the Hersham Councillors via John O’Reilly were invited to give their opinions on a scheme which included cutting the main carriageways own to one land and increasing the width of the cycle lanes and the Government would pay for this.

I was reluctant to go along with this, but it was possibly a start in reducing the speed of traffic.

However I did suggest that they try the scheme out with cones instead of painting the white lines.

After I saw the lines being painted and getting a clearer picture, I withdrew my support and asked John to reconsider the scheme and whether it would actually work.

To be fair, the speed of the traffic has been cut down but there are still too many motorists breaking the speed limit.

It has created a massive anti feeling in the village and questions the ability (unfairly) of the Councillors.
I have nothing to lose or gain by my stance on the matter, certainly not politically as after 41 years I intend standing down next May. My health will no longer let me carry on.

I have a lot of sympathy for the massive amount of people who have opposed this scheme, and once again I have to say that all we want is a pelican crossing and speed cameras.

Recently the county council have spent £500k on promoting a scheme to create Surrey as a unitary authority, even though it does not meet the Government’s criteria.* This is public money that could have been used on more important items like our much needed Pelican crossing.

The council taxpayers of Hersham send over £9m a year to the county council in council tax plus £1m in business rates. (plus £3m to Elmbridge) with that sort of yearly contribution, we should expect to have the occasional money spent to improve our highways for both pedestrians and motorists.

The proposed crossing will not have the desired effect of making the road safer for pedestrians and in my opinion could make the road even more dangerous.

They say that the trial will last three months, but they must see that it is causing a lot of unrest in the village and should be stopped now. They must rethink it!”

Interesting to read both views here, and I remain open-minded and (perhaps naively) confident that the right decision (whatever that is) will be made in the long run.

It’s an understatement to say there’s a lot going on in the world at the moment, and over the past 6 months I’ve seen a huge amount of community spirit, caring for our neighbours, supporting the vulnerable, genuine good being done and local residents really being their best selves in times of astonishing adversity.

Dial down the rage a couple of notches. You can oppose and campaign without insults and personal attacks.

At least I hope you can. 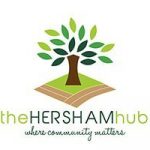 Have you joined The Hersham Hub group on Facebook?

Work with The Hersham Hub